I could swear that I’ve blogged before about bubbles and how excited one of my graduate school professors was about how in the then-near future, we could drive across country listening to “our” radio station, rather than continually trying to find a station that played music we enjoyed.  It worried me then, this bubble, and it continues to worry me today.

A few weeks ago, one of my cousins and I were speaking and she was expressing sorrow and confusion that a friend of hers had said that they couldn’t be friends because my cousin had voted for Trump.  (perhaps I should mention that most of my family are Republicans, adhering to those oft-forgotten New England Republican ideas)  This past weekend I had dinner with another group of cousins and one of them said “[your father] is one of the smartest people I’ve ever met – how can he be a Democrat?”  Of course, my father would ask the same, in reverse, about this cousin.  Most of my cousins are appalled at what’s currently going on in Washington, and while they may have voted Republican in November, they are not fans – or supporters – of the current president.

My point being, not every Republican supported the presidential candidate.  Just as many Democrats didn’t support that party’s presidential candidate.  But… do we really know that?  understand that?  My first cousin’s friend feels – as so many others feel, and have expressed on Facebook/Twitter – that simply being Republican and voting that way means that you are evil and responsible for all the proposals being mooted now (eg., rolling back environmental protections, changing or repealing LGBTQ legislation and so much, much more)  Why would otherwise intelligent, nice people vote that way? 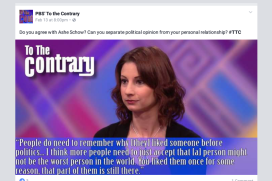 It’s not a new observation, but the problem is that we live in increasingly narrow bubbles and echo chambers, relying on confirmation bias only rather than exploring the subject and making up our own minds.  With that in mind, I was interested to read Joyce Valenza’s column about Allsides.com. While I don’t pretend to understand their crowd-sourcing of “left”, “right” and “center” or agree with all their rankings, I do think that it’s interesting as a source of different viewpoints on a topic.  David Wee then started an email conversation about the use of this site (he’s doing great work teaching about “fake news”), and Tasha Bergson-Michelson recommended Burst Your Bubble.  The problem with the Guardian site is that it presupposes you’re liberal – where’s a similar site for conservatives?

At my school, there’s a definitely hostile attitude towards conservatives.  Some are upset that the school hasn’t officially come out against recent executive orders and policies, much less against the president.  What if, instead, we tried to understand why people voted the way they do, or the why they have the opinions they do about issues that don’t conform to our opinions?  I’ve read many articles recently trying to understand why people voted for Trump (here’s one) because I understand what was appealing about Clinton and Sanders.  Have you?  Do you assume that everyone you know feels the same way you do about issues and candidates?  Or do you know that there are some who don’t share those opinions, and do you try to understand what they’re thinking?

We have another year, perhaps, before the midterm election campaigns start up.  Trump 2020 is actually a thing.  What is your commitment to getting out of your bubble before then?

This site uses Akismet to reduce spam. Learn how your comment data is processed.

Things I Blog About