For some reason, when I was a young child, someone gave me this doll: 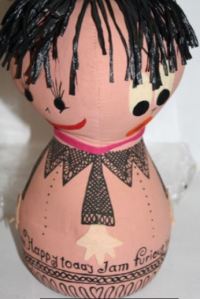 I can’t say that I turned it on a regular basis to tell my parents (or anyone) how I was feeling.  To be honest, I think I may have been a teen – or nearly – before I realized that it read “I am” not “Jam”.  And yes, I proudly claim to be a reader.  Anyway…

The idea that you can telegraph, via doll or button or bumpersticker or t-shirt or choose-your-manner-of-expression, your mood or goal is interesting.  Just look around you the next time you are out in public.  And we also love to do this as librarians.  For years I had this sign near my desk, and I’m waiting to redesign our desk at work so that I can redisplay it:

So, my point?  Well… not really sure there is one.  It’s just that the tenor of the times, politically, and the wave of news about natural disasters (fires, floods, hurricanes, potential supervolcano eruptions, etc.), and trying to get things organized at work as we begin to prepare for a new library and next semester’s Research Season (4 months of 14+ classes/day coming to do research), and personal travel/conferences has led me to think about what I want to display to others.  What’s my motto, my t-shirt slogan?

Luckily, the incredible Sarah Kelley-Mudie came to my rescue.  Several years ago, at another school, she coined the phrase Relentless Optimism.  And it became a movement.  And the other day I saw that there was this sticker on her cellphone:

Now, I’ve tried, over the years, to display just that type of attitude.  After the fire at Hackley, my go-to response was one of humor, of trying to let others in the community know that it was really ok: no one was hurt, we could rebuild, and honestly, if 35,000 books and any number of computers and metal shelves and office supplies were burned it wasn’t the worst thing in the world.  Six years earlier, I’d seen students at PCS wondering when they could go back to having “normal” lives as the adults around them continued to struggle with the events of September 11th and our response to those events.  So the idea of “optimism” isn’t foreign.  My goal is to focus on the relentless part.

This site uses Akismet to reduce spam. Learn how your comment data is processed.

Things I Blog About